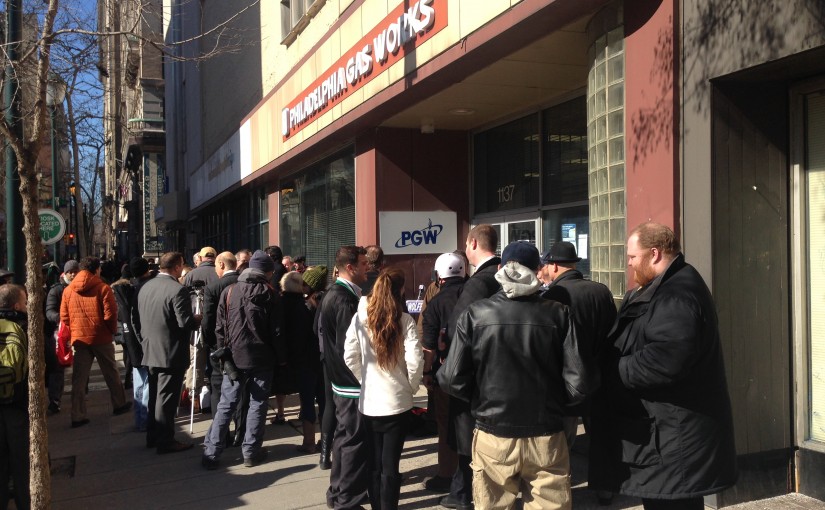 Outnumbered eight to one in voter registration, Republicans in Philadelphia are often overlooked in discussions of city politics.

Many Republicans feel that this lack of competition is not simply a problem for the Republican party.

“I’m continually disappointed by Philadelphia politics because with the disparate registration here, I feel like there’s very little competition and very little new ideas,” said Linda Kerns, the deputy council for the Philadelphia Republican Party. “And that’s bad for our city.”

Philadelphia has not seen a Republican mayor since 1954 and it doesn’t look like that will be changing. The mayoral race is in full swing and the Republicans have yet to rally around a candidate.

However, it is not picking a candidate that is the problem, according to Councilman David Oh.

“So, we get a very bright person,” Oh said. “A bright, sharp, articulate person. Basically, he or she is coming out of nowhere. They don’t have a following. Nobody has ever heard of them. And so it’s like taking a physically gifted person who has a week to train to fight Mike Tyson.”

While Republicans do not yet have a mayoral candidate, many have cast their eyes toward the City Council at-large seats as a place for meaningful change.

At his formal campaign announcement for a City Council at-large seat, Matt Wolfe touched on many of the issues Republicans said they would want the next mayor to address, particularly the perceived anti-business sentiment in the city.

“We’re trying to attract jobs to Philadelphia but to get your gas service turned on, you need to take time off from your job to be here,” Wolfe said.

Kerns feels that the taxes in Philadelphia discourage new businesses from forming, robbing the city of jobs. Tax reform is an issue she would like to see the next mayor address.

“If you look around at the businesses here, a lot of them are businesses that have to be in Philly,” Kerns said. “Most businesses escape as quickly as possible to avoid the high taxes. It is not a very business friendly city. I live in the city and I’m an attorney, so it’s convenient for me to be here. But if I was starting a huge company, I certainly would not headquarter it here and I have clients who’ve specifically moved out of the city because it’s so unfriendly to business.”

Some Republicans, such as Darin Bartholomew, think one of the biggest issues in the upcoming mayoral primary is the lack of ideological diversity among the candidates.

“Regardless of one’s affiliation, I think most Philadelphians see first hand every day the importance of having multiple viewpoints represented,” Bartholomew said. “The Democratic lock on city government has allowed politicians to lose sight of the reasons they were put into office by the voters without seeing any major backlash at the polls.”

Moving forward, Republicans are looking for ways to break the Democrats’ hold on city government but it is proving to be tough.

“People have become accustomed to the status quo,” said Joe DeFelice, the executive director of the Philadelphia Republican City Committee. “It is up to us to change that and we are taking the requisite baby steps.”

While Republicans hope to become more relevant in citywide politics, Councilman Oh feels it is imperative for the party to become more unified before that can happen.

“A lot of what I think ails the future of the Republican Party in Philadelphia has been an inability to get on one sheet of music,” Oh said.

Bartholomew feels that the Republicans’ issue lies in their messaging.

“Republicans in Philadelphia need to focus on telling the people of Philadelphia why they should switch,” Bartholomew said. “It’s one thing to continuously point out the shortcomings of Democrats who serve us. But if we don’t show how we are different and what our actual plan is to make their lives better, people will stick with the candidate and with the party endorsement that they have trusted for years.”

Despite the challenging road ahead, Philadelphia Republicans feel they are working to create a brighter future for their party and their city.

“Remember, luck is where opportunity and preparation meet. We feel that that opportunity is now and we are prepared to take advantage of it,” DeFelice said.

– Text and images by Megan Whelan and Jade Perry.