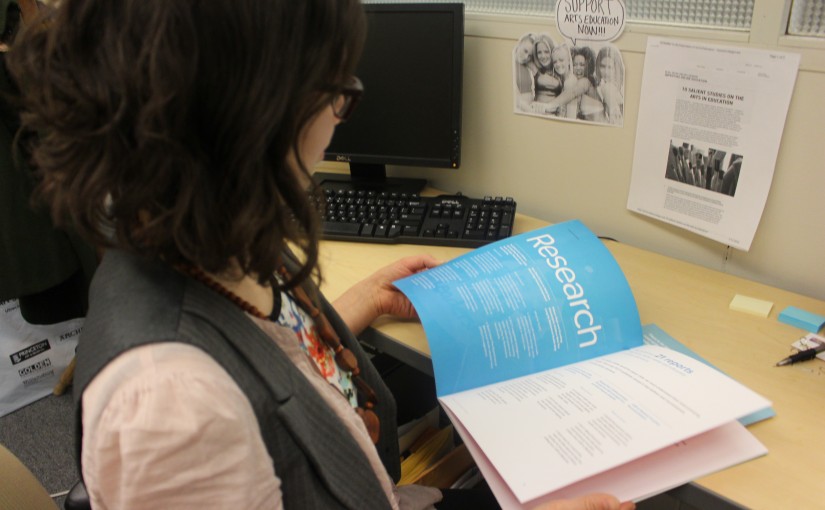 As we get closer and closer to the Philadelphia mayoral election, one of the focal points of discussion will be the candidate’s plans for bettering education in Philadelphia.

Yearly budget cuts have plagued schools, resulting in layoffs, lack of adequate supplies and the removal of after school programs.

Many outside organizations with a connection to the arts are taking a close look at how the next mayor could affect art programs in public schools. The Picasso Project is one such organization.

Under the umbrella of Public Citizens for Children and Youth, which advocates for better health and education for the children of the region, the Picasso Project offers a mini-grant program to Philadelphia schools to make sure that children and youth still have access to the arts. The Picasso Project has reached roughly 35,000 students through its mini-grants to 121 schools since 2004.

“The arts are essential to learning,” said Linda Fernandez, project director for Picasso Project. “We need to make sure that when funding is being allocated, that we’re also keeping the arts in mind and putting value towards that.”

“I really didn’t feel like the students were allowed to be as creative as I would like,” Fernandez said. “I wanted a really creative environment. I wanted to build, to explore, to learn in multiple different ways and it was just too constrained.”

Similar to PCCY, the Greater Philadelphia Cultural Alliance is an organization that has been a committed advocate for the arts. Maud Lyon, president of the organization, also believes arts funding is a necessity for Philadelphia public schools.

“Art and culture is an incredible tool for helping children develop their talents and teach them critical thinking,” Lyon said. “Art and culture should be an integral part of a good education. Unfortunately, too often, these activities are not considered essential so they suffer disproportionately in budget cuts.”

“Whoever will be the next mayor, we want them to have arts in the forefront,” Fernandez said.

She believes that although the city has been making positive strides to support the arts community of Philadelphia, that same support hasn’t trickled down into schools.

“So that’s where we really hope the next candidate, the next mayor, will put an emphasis on,” Fernandez added.

Lyon believes that emphasis is needed from the city’s next mayor. She highlighted why the youth in the city need the funding.

“Many urban students come from disadvantaged backgrounds,” Lyon said. “School is their primary access to music lessons or to attend museums, theaters or concerts.”

High school students must fulfill arts requirements in order to graduate. That means that elementary and middle school students are the most affected by cuts in arts programs.

Cambriae Bates, an alumna of the Philadelphia High School for the Creative and Performing Arts, now engages in poetry and creative writing in Philadelphia and beyond. She believes her school and its focus on creative development helped her realize her voice. This increased Bates understanding of many genres, styles and platforms of writing.

“Students who may not learn best through the traditional classroom teaching approaches are the ones who are suffering the most,” Bates said.

As a member of Babel, the first spoken word poetry collective on Temple University’s campus, Bates has used her platform to conduct poetry workshop’s with Philly’s youth searching for a creative outlet to express themselves. While Bates understands the strides that many teachers and principals have taken in utilizing outside organizations to keep arts inside classrooms, she believes these efforts do not reach every student.

“When outside organizations bring their programs to the schools, they only go to one class,” Bates said. “Other students are still missing out on any type of arts education. Teachers, regardless of the subject they teach, have to begin to add arts within their curriculum.”

“Visual art students excelled in geometry in my high school because they were constantly measuring in order to make ratios accurate in their pictures and to create balance in their life,” Bates added. “Vocalists had to learn Italian if they wanted to sing many opera compositions.”

As debates begin to heat up in the coming weeks, many will keep their eyes and ears opened hoping to hear of a candidate who is ready to take a firm stance on changing the current state of education. While there are many layers within the discussion of education in Philadelphia, those most affected hope that alternatives other than cutting arts funding in schools will be addressed.

– Text and images by Patrick Smith and Deneia Washington.